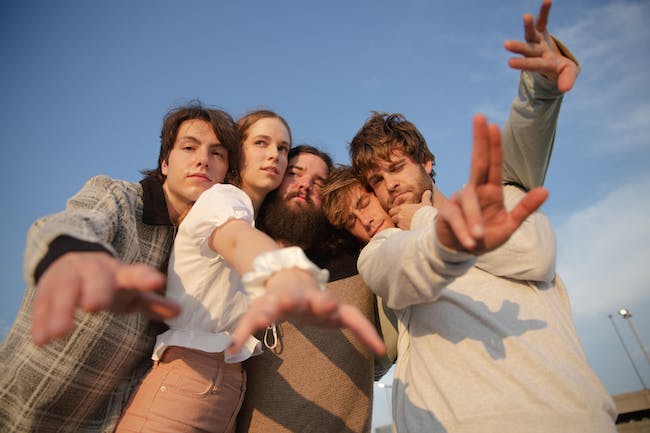 The Pressure Kids w/ Mountains Like Wax and Ethansroom

nashville-based indie rock band the pressure kids are, quite simply, proud to have come of age together. since forming as college freshmen in the fall of 2013, the band spent years cutting their teeth in and out of town as they finished up their studies. they started turning heads with the summer 2018 release of “fever,” a romantic slow-burn of a rocker that was placed on spotify’s new music friday playlist and ultimately became the lead single off the band’s self-titled debut EP. announced in february and released in march of 2019, the pressure kids received praise from a number of local and national outlets for being “some of the most unique and lush indie rock coming out of nashville right now” (no country for new nashville). this self-titled six-song offering led to opening slots on southern and midwestern dates with the regrettes, illiterate light, *repeat repeat, and cayucas, as well as words in the 405, flood magazine, earmilk and alternative press - but it’s time for some new songs that show some new shades of all the pressure kids are capable of.

“it was sweet survival,” nick johnston, katy carmichael, and allan cuva lament on the second chorus of “asleep on the ocean,” the genre-bending, statement-making, six-minute-long track that, though tucked in the middle of their forthcoming EP, captures the core of who this band has always been. five friends who have seen each other through breakups, makeups, promotions, graduation dinners. survived their fair share of false starts and close calls, of high hopes and diminishing expectations. working hard to still come out stronger on the other side, and remaining entirely independent along the way.

the pressure kids: vol. 2, a brand new six-song EP out friday, december 6th, showcases where the band has been, and where they’re heading. opener “magazine” has been heard at house shows and in proper venues since the fall of 2014, while band-dubbed fan track “thin skin” came together in the final stages of (home) studio time, the only way a song like that could, with last-minute chord changes and gang vocal tracking in allan’s old kitchen. lead single “inspiration blues” introduces a colorful cast of characters, spread out over a sprawling map of distortion and driving rhythm, while closing track, the arresting solo ballad “no land left in hollywood,” brings things home in the truest sense of the phrase.

serving as both a graduation and an introduction, the band’s march 2019 self-titled EP was a formal invitation to stick around, but the pressure kids: vol. 2 is a testament to what can be accomplished when five friends believe in something bigger than themselves. this is a band who has released 12 stellar songs and 2 ambitious music videos in 2019 alone, a band who will continue to do so as long as they are able.

the pressure kids intend to make a lot of records. don’t think about leaving before the first full-length arrives.