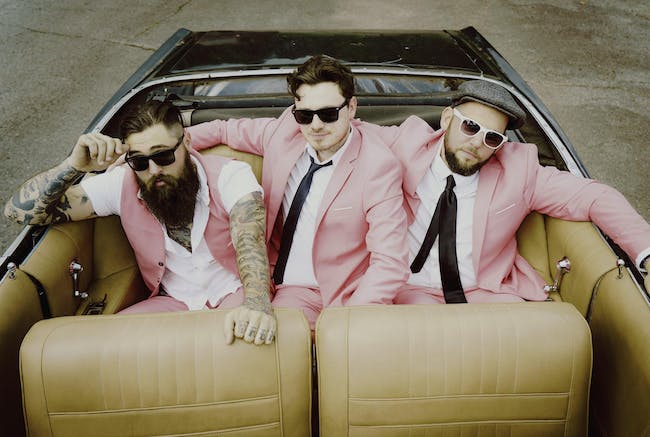 Few bands have been able to cash in on their bad habits, dirty minds and questionable life choices quite like power-pop band THE PINK SPIDERS. The band, made up of members Matt Friction (Vocals, Guitar), JoCo (Bass) and Joey B-Side (Drums) have gained almost as much notoriety for their exploits, attitude and iconic look, as they have for the catchy and explosive sound they generate.

The band had been enjoying a brief hiatus until a wildly successful pop-up show in late 2016 celebrating the ten year anniversary of 2006’s Teenage Graffiti LP laid the framework for an auspicious future and another full length record. That album, titled Mutations, was released on July 31, 2018 12” on hot pink vinyl via Mean Buzz Records.

This newest record, tracked and mixed in the band’s hometown of Nashville, TN, is eleven songs of power-pop perfection recalling the sweet hooks and blistering pace of the SPIDERS’ second LP Teenage Graffiti. The band has released videos for lead singles “Black Dagger” and “Capital F” (the latter exclusively premiering via Alternative Press) and they’ve hit the road for most of the year to celebrate the new release with fans.