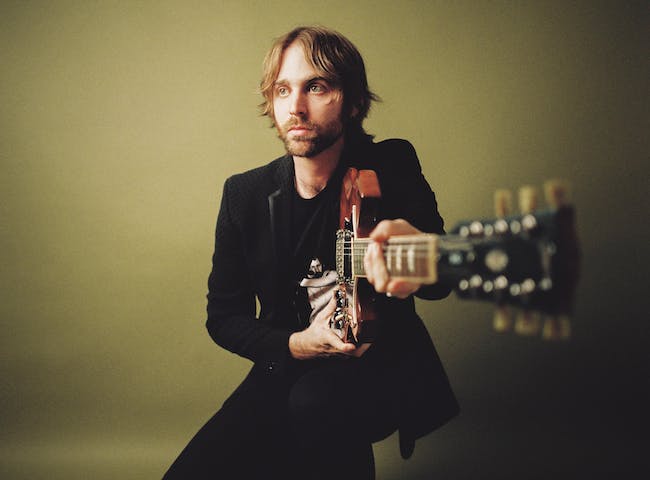 Acclaimed solo artist. Songwriter. Grammy-winning member of Jason Isbell and the 400 Unit. Producer. Studio musician. Modern-day guitar hero. A professional musician since the age of 18, Sadler Vaden has spent the better part of two decades on stage, on the road, and in the recording studio, lending his unique rock & roll approach to highly-revered bands, up-and-coming acts, and solo albums like his forthcoming Anybody Out There?

The full-length follow-up to his 2016 debut, ​Anybody Out There? ​mixes the hook-savvy sweep of Vaden's songwriting with the supersized stomp of his electric guitar. It's a modern record that doesn't ignore the past, balancing frequent nods to Vaden's 20th-century influences — including Neil Young, The Who, Tom Petty, Joe Walsh, and Oasis — with a contemporary sound that mixes raw, live performances with digital recording technology. Self-produced by Vaden, engineered by longtime collaborator (and multi-platinum producer) Paul Ebersold, and mastered by Grammy Award-winner RichardDodd,​AnybodyOutThere?i​sSadlerVadenathismostadventurous,stocked with melody-driven songs that deal with the challenges of creating a true human connection in a modern, technology-obsessed world.

Raised in North Myrtle Beach and the outskirts of Charleston, SC, Vaden began playing gigs as a teenager, serving as the frontman of a locally-beloved rock & roll power trio named Leslie. The band shared shows with headliners like Drivin’ N Cryin’ and Jason Isbell, both of whom later recruited Vaden to join their own lineups. During his time with Drivin’ N Cryin’, he produced the band's series of ​Songs... ​EPs while also playing lead guitar on crowd favorites like "Fly Me Courageous" and "Straight to Hell." He left the group for Isbell's band in 2013, shortly before Isbell's career-shifting album Southeasternh​itstores,andhasremainedanintegralmemberofthegroupeversince, lending his vocal harmonies and song-serving guitar fretwork to Grammy-winning albumslike​SomethingMoreThanFreea​nd​TheNashvilleSounda​longtheway. Meanwhile, he has also continued releasing his own material, including his 2016 self-titled debut full-length and standalone singles like "Monster," the latter of which was hailed by ​Rolling Stone ​as a "T. Rex-evoking jam [that] doubles as a commentary on the U.S.'s negative political and social climate."

Vaden's diverse career continues with ​Anybody Out There? The title track mixes drummer Fred Eltringham's percussive thunder with a monster guitar riff co-written alongside Audley Freed, while "Next To You" is a highway-bound road song that nods to the Heartbreakers' heartland rock. The guitar tones and communal themes of Aaron Lee Tasjan co-write "Peace + Harmony" channel George Harrison, and the nostalgic "Modern Times" makes room for swirling Mellotron, acoustic guitar, and claves. The album culminates with "Tried and True," a guitar-heavy love letter to rock & roll music that concludes ​Anybody Out There? o​ n an anthemic note.

"It's always been there for me, through the good and bad," Sadler Vaden says of the rock & roll genre, whose uplift and epic punch first convinced him to pick up the guitar as a 10-year-old. Years later, he's proudly carrying the torch, nodding to the rock & roll music that came before him while crafting some contemporary classics of his own.