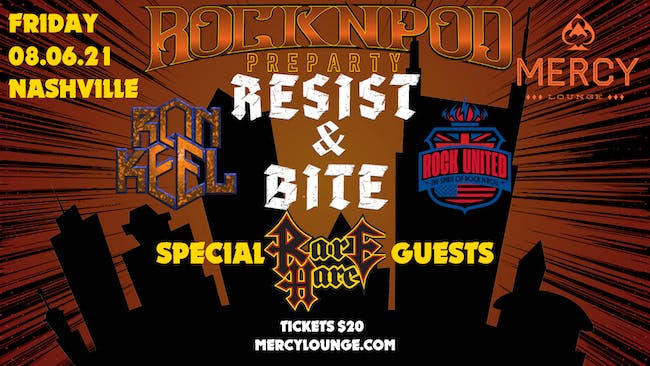 Join us for a great night of rock music featuring very special guests!

Rock United will begin the festivities with a set of great 70’s-era rock covers! Rock United is a professional rock and roll cover band. Their music focus’ on the best rock and roll songs radio offers from the 1970’s era. Based in Nashville, Tennessee. Rock United’s catalog of song hits range from Aerosmith to ZZ Top and ever great rock band in between. They bring with them a collage of very skilled and well experienced profession musicians.

Up next is an intimate acoustic set from Ron Keel. From that first Steeler album to recent releases like “South X South Dakota” and “Fight Like A Band,” Ron Keel’s 35-year career in entertainment has taken him from the concrete jungles of arena rock to the dirt roads of country music. Along the way, he has sold millions of albums and toured the world as both a heavy metal screamer (KEEL, Steeler, and a brief encounter with Black Sabbath) and a southern rock/outlaw country artist (with dozens of songs in major films and TV shows). For the past two decades, the Metal Cowboy has combined both genres, establishing a style and a persona which captures the heart and personality of this self-proclaimed rock n’ roll outlaw.

Headlining the night is Resist & Bite. Resist & Bite was formed in early 2019 by Tommy Skeoch (formerly of Tesla), David Parks, and Steve Stokes. Later that year Brian Powell and Nathan Utz (formerly of Lynch Mob) were added to the roster. The band spent most of 2019 writing and recording. They made themselves public to world in February of 2020. On February 29, the band released it's first song "The Myth I'm Livin' " on Metal Works, 105.9 The Rock in Nashville, TN. The song has since achieved much positive attention.

Finishing things off Tyson Leslie and ROCKNPOD present Rare Hare 11.5 - a special all-star jam performance featuring the guests of ROCKNPOD joning some of Nashville finest touring, session, and working musicians. This set will include guests performing some of your all-time favorite rock and metal jams.