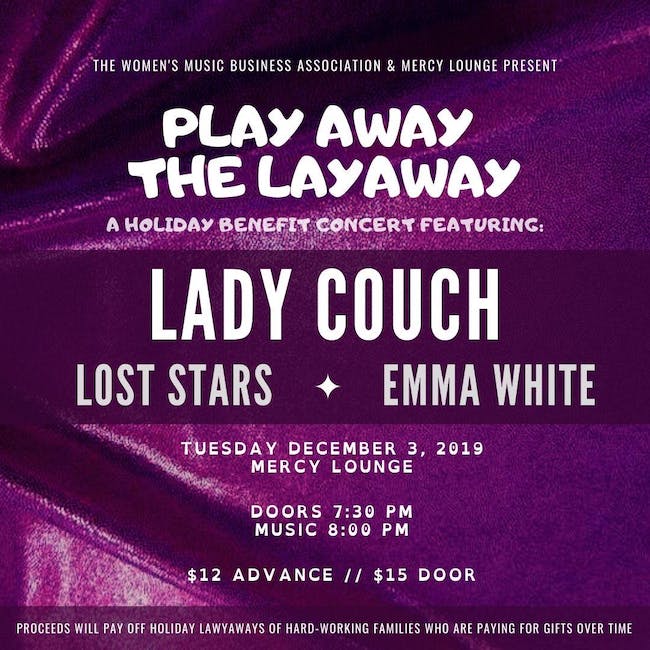 It's the time of year that Holiday Layaway is in full effect, helping hard-working families take care of buying holiday gifts over time. All proceeds from this event will go directly towards surprising Middle Tennessee families in need by paying off their Holiday Layaways. WMBA is proud to support this wonderful cause this holiday season!

LadyCouch was born out of Keshia Bailey and Allen Thompson’s love for one another and their love for honest, soulful music. Although their friendship stretches back years, it wasn’t until the winter of 2017 they decided to share a stage. After a show at Nashville’s Exit/In where they were on the same bill, they realized their already strong individual voices had power and depth they never thought possible when combined.

The pair seem to come from two different worlds, musically, with Keshia hailing from the straight-ahead throwback Soul group Magnolia Sons, and Allen from the psychedelic folk of the Allen Thompson Band. But their similar Appalachian upbringings and their genuine appreciation for Soul, Rock, Funk, Country and Folk allow them to build bridges across genres to create a sound all its own. Allen tells it like this:

“Keshia’s been one of my very best friends and confidants for a long time. I’ve always been in awe of the power and emotion in her voice. When we first got together, I think

we were both kind of in a place where we were feeling stagnant in terms of our creative output. I knew I wanted to bring a little more soul into what I was doing, but I didn’t know how to do it within the confines of ATB. I was falling in love with the big

revue-type bands of the 70’s like Little Feat, Parliament, Mad Dogs & Englishmen, Bob Marley & The Wailers, and Delaney and Bonnie. I kinda forced Keshia down that rabbit hole too & we decided that if we were gonna have a band, it was gonna be a big one like those.”

So they enlisted the help of Diego Vasquez and the Nashville Horns and vocalists Dana Kalan and Olivia Burnett then got to work building the band. The core group consists of keyboard player and all around musical genius Jimmy Matt Rowland, Allen Thompson Band stalwarts Grayson Downs, Clint Maine & Ray Dunham, Atlanta guitarist Mike Ford Jr from Radio Birds and Migrant Worker, and Gordon Persha from Nashville jammers Los Colognes.

On any given evening in Nashville its not uncommon to see folks from Old Crow Medicine Show, Maggie Rose, Jon Latham, Little Bandit, Drivin N Cryin, and many other Nashville mainstay musicians jamming with the big band with the nonsense name.

“The name is kind of an inside joke between a few folks who lived in or frequented my old house in East Nashville”, Allen explains.

“Its a long story, but basically we knew that if Keshia and I were gonna start a band together, LadyCouch was gonna be its name.”

Fortunately for them, the name is the only thing about this band that doesn’t make sense. When LadyCouch is on stage, they do everything with a purpose and drive that’s rare

to see in a group that large. While their sound might be reminiscent of the huge hippie orchestras of decades past, the group is by no means a nostalgia act. Their approach to writing, melodies, harmonies and improvisation is as original and refreshing as

you can get. As far as they are concerned, LadyCouch is the Future and the Future Looks Fine.

With influences from bands like The 1975 and Imagine Dragons, Lost Stars is known for their lyrically driven songs that crossover pop, rock, dance and indie styles to create a truly unique sound. The band is comprised of three guys with Midwest roots, Kansas if you want to get specific, that now call Nashville their home.

In their first year as a band, Lost Stars released their debut EP, Dreaming in the Dark, introducing the Nashville music scene to a new brand of pop music. Shortly after in the spring of 2017, Damian Malnar (vocals/keys), Charley Holden (guitar), and Trey Warner (guitar) went on tour for the first time, hitting places like Kansas City, Chicago, St. Louis and Atlanta. During this time they opened up for heavy hitting indie bands like Coin and ARIZONA, gaining thousands of new fans along the way.

Since their first successful tour, they’ve released a follow-up single, “It Only Takes One”, booked a second tour, signed a sync licensing deal, and continue to work on new music. During their Shot In The Dark Tour in the early parts of 2018, Lost Stars played in 20 different cities in the south and northeast including major markets like: New York, Dallas, Philadelphia, Tampa, DC, and more. They also returned to Kansas City, Chicago, and Atlanta for their summer series.

Since their first successful tour, they’ve released a couple singles, “It Only Takes One” and “Whip Me,” booked a second tour, signed a sync licensing deal, shot 3 live performance videos, and continued to work on new music. The trio went back in the studio right before the holidays to record their sophomore EP titled SIRENS + LIGHT. They will feature three singles each paired with a lyric video released prior to the record which is set to drop summer 2019. With a new record, more energy, a third tour, and lots of puns, Lost Stars is gearing up for a wild ride this year.

Garnering three million streams independently, Rolling Stone recently added recording artist Emma White to their prestigious "10 New Country Artists You Need To Know" list. Blending genres and offering a new take on modern pop/country, Buzzfeed dubbed her a "2018 Country Music Obsession." Her latest single "I Thought You Were The One" was added to Spotify's Wild Country playlist and became an iTunes Hot Track for eight consecutive months. Apple Music featured the track on their Young Country and Breaking Country playlists - a compilation of songs the editors think "are about to make a huge impact." The first track from her latest EP, "Overthink It," was also featured by Apple Music and added to Spotify's New Boots playlist.

Growing up in Baltimore, Maryland in a musical family, White was named after country legend Emmylou Harris. Taking after her songwriter mother, she began writing songs at an early age, blending the music she grew up listening to - a mix of pop, country and R&B. Her musical prowess has led to opening spots for Brad Paisley and Rodney Atkins (among others) and National Anthem performances at Staples Center (LA Lakers), M&T Bank Stadium and Camden Yards. The "indie Taylor Swift" (Atwood Magazine), BMI said of White, her "pop savvy vocal and sugary groove ooze unabashed hope and undeniable promise."