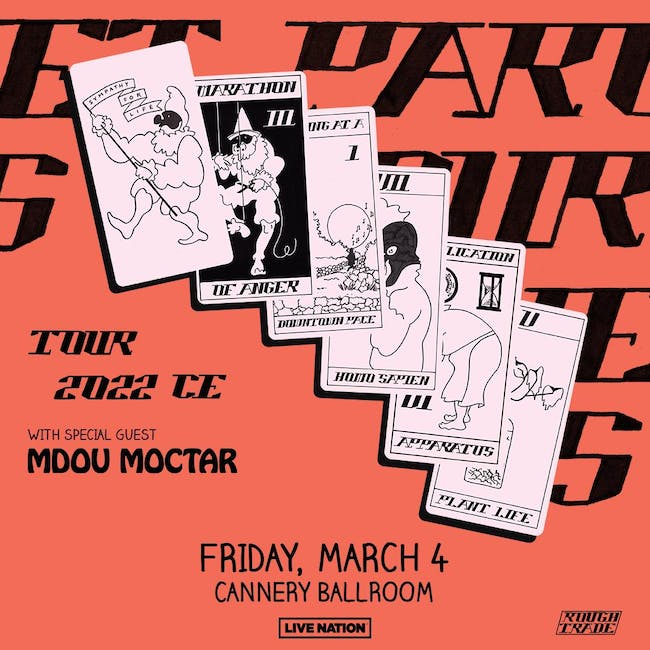 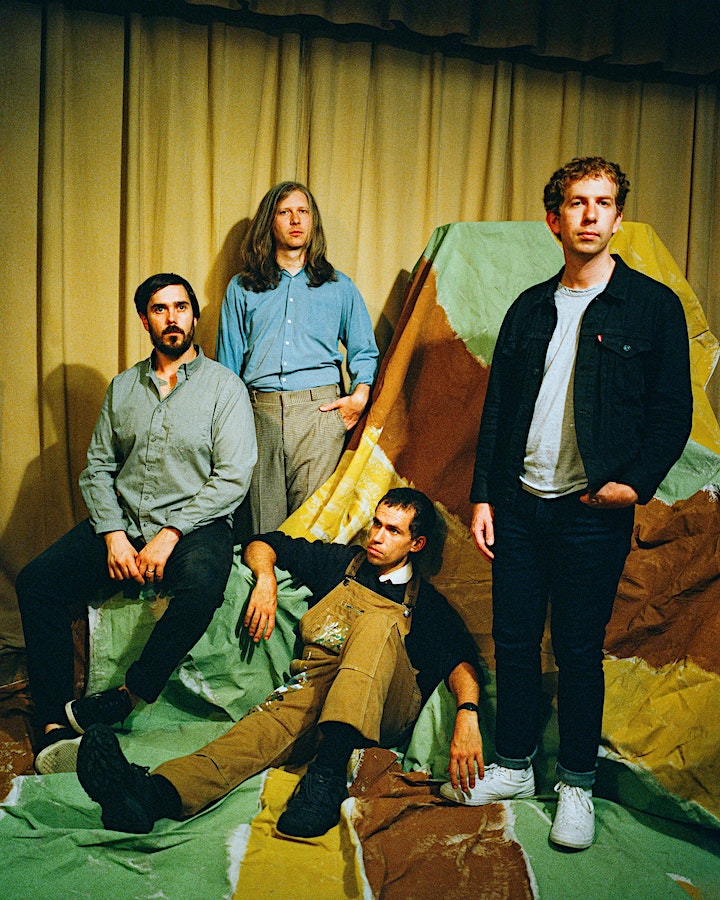 Parquet Courts’ thought-provoking rock is dancing to a new tune. Sympathy For Life finds the Brooklyn band at both their most instinctive and electronic, spinning their bewitching, psychedelic storytelling into fresh territory, yet maintaining their unique identity.

Built largely from improvised jams, inspired by New York clubs, Primal Scream and Pink Floyd and produced in league with Rodaidh McDonald (The xx, Hot Chip, David Byrne), Sympathy For Life was always destined to be dancey. Unlike its globally adored predecessor, 2018’s Wide Awake! – a Top 30 hit here and an album of the year everywhere from Spin and The Skinny to NME and Australia’s Double J – the focus fell on grooves rather than rhythm.

“Wide Awake! was a record you could put on at a party,” says co-frontman Austin Brown. “Sympathy For Life is influenced by the party itself. Historically, some amazing rock records been made from mingling in dance music culture – from Talking Heads to Screamadelica. Our goal was to bring that in to our own music.

“Each of us, in our personal lives, has been going to more dance parties. Or rather, we were, pre-pandemic, which is when this record was made.”

Before sessions began at Brooklyn’s The Bridge studio in autumn 2019, as ever, the quartet (Brown and Savage plus bassist Sean Yeaton and drummer Max Savage) took time out to work on ideas separately. For co-frontman A Savage, that meant a trip to Italy armed with Mad Hatter acid.

“I took a lot of acid with me and started working out,” he says. “I call it trippy lifting. I would trip and work out during the day, then write songs at night. Three or four of the songs that made it on to album began there – Walking At A Downtown Pace, Pulcinella, Trullo. Most of my ideas for the artwork formed at that time too. I had a big piece of paper taped to the wall that read “CAN, CANNED HEAT, & THIS HEAT”. That was the sound I wanted to find.”

Back home, the jamming began.

“Most of the songs were created by taking long improvisations and moulding them through our own editing,” explains Brown. “The biggest asset we have as artists is the band. After 10 years together, our greatest instrument is each other. The purest expression of Parquet Courts is when we are improvising.”

Dreamy lead single Plant Life, released in June, was edited to 10 minutes from a 40 minute-plus jam and almost halved again for the album. Digital disco-punk anthem Marathon Of Anger, which began as a largely electronic jam inspired by the Black Lives Matter protests, was painstakingly snipped from 41 minutes to a neat four and a half.

In between was where the hard work occurred.

“More than any of our albums, this one was about the process,” says Brown. “It was about viewing the themes through a dance music lens and our own filter to discover where it would take us. Seven albums in, the pressure is on to do something new, but still sound like us.”

Key to the complex process was working with McDonald, first at The Bridge, then for an intense fortnight at The Outlier Inn, a sprawling, bucolic studio in the Catskills, where 2014’s Sunbathing Animal was recorded.

“I met Rodaidh when I was DJing in LA,” notes Brown. “I brought my records to his house and we spent days talking about what we wanted to do and sampling stuff from both of our collections for references. When he came to New York to record, we mashed up some of those samples to make beats and grooves and jammed over the top. It was a cool way to work, completely different for us.”

Also central was a Korg MS-20 synthesiser, through which the guitars were fed. Austin often switched to synths. Max Savage played lots of e-drums live. In the Catskills, they used a geodesic dome as a reverb tank and Brown manned a dub station.

“On some of the songs, I wasn’t playing anything but everyone else’s instruments,” he says. “For Plant Life and Marathon Of Anger, I ran everything through the mixer doing the echoes and delay. It’s the same way you’d mix a dub album.”

In March last year, the band decamped to Real World Studios near Bath to work with John Parish on Sympathy For Life’s Sandinista!-esque title track and the sensual, strung-out Pulcinella.

“While we were there, the papers were full of Covid stories, but we were too busy to read them,” explains Savage. “We thought the headlines were unnecessarily alarmist until we arrived at the airport to fly home and people were wearing masks. We left two days before lockdown.”

By then, the album was almost finished and all of the lyrics were written. Spookily, Sympathy For Life opens and ends with songs which reference masks. Closer Pulcinella was inspired by a souvenir of the masked Commedia dell’Arte character of the same name.

“Only afterwards it occurred to me that Commedia dell’Arte was very popular during the Great Plague,” says Savage.

Why did he gravitate to this character while in Italy?

“Perhaps I had a plague premonition,” he smiles.

As everything shut down around the world, so – inevitably - the album release was postponed too. It finally arrives this October, exactly a year late, yet also right on time. 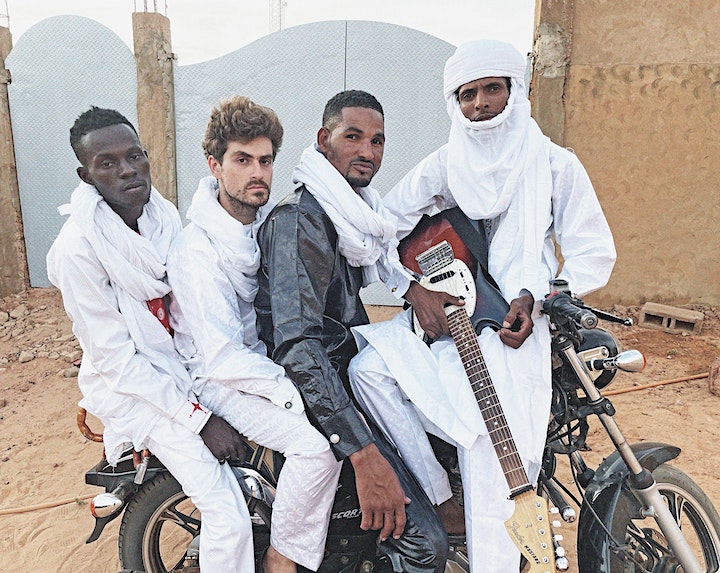 Mdou Moctar’s home is Agadez, a desert village in rural Niger. Inspired by YouTube videos of Eddie Van Halen’s six string techniques and traditional Tuareg melodies, he mastered the guitar which he himself built and created his own burning style. A born charismatic, Mdou went on to tell his story as an aspiring artist by writing, producing & starring in the first Tuareg language film: a remake of Purple Rain called Akounak Tedalat Taha Tazoughai - which translates to “Rain The Color Of Blue With A Little Red In It”, winning the approval of his family and his community. The word and the sound travelled across West Africa via mobile phone data cards, a popular form of local music distribution. Gruelling DIY world tours and albums on the independent US label Sahel Sounds followed, including 2019’s landmark Ilana: The Creator album that earned Mdou Moctar an ecstatic international audience.

Afrique Victime is result of the combined efforts of Mdou and the members of the band that shares his name. Mdou’s crucial collaborator is Ahmoudou Madassane, who’s been his rhythm guitarist since 2008- their two guitars are an alchemical combination. As a songwriter, producer and recording artist Ahmoudou is the premier musical ambassador to Tuaregs in Niger, empowering young musicians with instruments, recording opportunities, and visas. Masassane helped form the revolutionary first woman-fronted Tuareg guitar band Les Filles De Illighadad, whose debut album and tours caused an international sensation in 2019.

Producer & bassist Mikey Coltun flies 20 hours from Brooklyn, NYC, then takes a 28 hour bus ride to reach Agadez so the band can practice and record. With no support from a major label or a manager, they made this journey out of Niger every time they toured. In the past three years, Mikey’s played over 500 shows on three continents as Mdou Moctar’s bassist, road manager, producer/recording engineer, and friend. Coltun recorded and produced Afrique Victime around the band’s travels in 2019- in studios, apartments, hotel rooms, venue backstages, and in field recordings in Niger.

Recording and honing songs as a touring outfit forged a livewire new sound, and If Ilana was a late ’60s early ’70s ZZ Top and Black Sabbath record – Afrique Victime is mid ’70s to early ’80s Van Halen meets Black Flag meets Black Uhuru. The ferocity of Moctar’s electric guitar and the band’s hypnotic rhythm section are on awe-inspiring display on songs like “Chismiten” and the mournful yet incandescent title track. Elsewhere, Moctar finds inspiration in highlighting lesser known facets of the group: “While people have gotten to know Mdou Moctar as a rock band, there is a whole different set of music with this band done on acoustic guitars which we wanted to incorporate into this album in order to go through a sonic journey,” he says. Mdou pays homage to one of his heroes Abdallah Ag Oumbadagou, the legendary Niger musician and political revolutionary, on songs “Habibti” and “Layla”. “Abdallah was a contemporary of Tinariwen and helped to pioneer the sound of Tuareg guitar music blended with drum machines and electronic sounds”.

“From prison to Nobel prize. They ceded to Mandela / Africa is a victim of so many crimes / If we stay silent it will be the end of us / Why is this happening?“ Moctar asks on the heartfelt and rallying title track. “I want the world to know that we are making music to promote world peace and be with everyone on the same level, fighting against racism”, he says. “All colors and genders are equal. Women, Men and children all suffer in the desert due to the colonization by France and therefore there is a lack of the basics - hospitals, drinking water, schools.”

The needs of Agadez are a major part of what drives Moctar as an artist, and promoting the region’s youth through music is an especially personal cause. “I know what it’s like to have been in that position,” he says, “to not have the support of your family, or the money for guitars or strings, it’s really hard. I have a lot of support from the younger generation, because I help them out a lot. When I get back from tour, I give them gear that I bought while I was away so they can go out and form their own bands.”

Says Coltun: “In Agadez the music and feeling at Tuareg weddings is exactly like the best of Western DIY/Punk shows. It’s loud, energetic and powerful. There is a sense of everyone helping out. Tuaregs are a tight community. If you’re Tuareg you’re considered family.”

The music listeners are the beneficiaries of the staggeringly powerful do-it-yourself musical ethic of Mdou Moctar- the man and the band- who’ve worked so hard to bring the spirits of families and communities in Niger to the West. Afrique Victime sounds and feels like a Tuareg hand reaching down from the sky, and we are very lucky for this chance to get lifted.