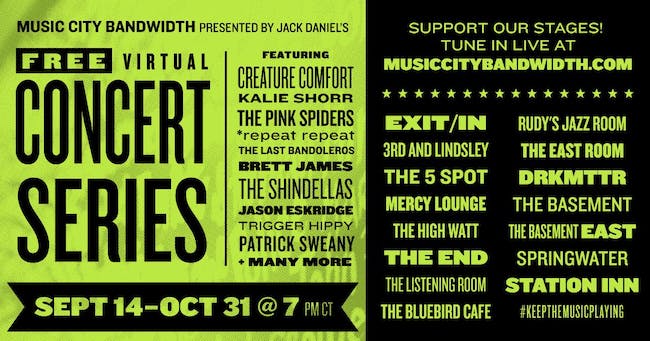 $0.00 Sales Ended On musiccitybandwidth.com
All Ages

Music City Bandwidth presented by Jack Daniel's hosts 30 concerts September 14-October 31 at 15 independent Nashville music venues, providing gigs for 120 Nashville-based musicians of diverse genres. Due to physical distancing and crowd size limitations mandated by the city's safety regulations, there will be no live audience. But everyone around the world can watch!

We're streaming the performances at www.musiccitybandwidth.com; come back each day at 7pm for a new show. While enjoying the show, please consider donating to Nashville's independent music venues. Your generous donations will go to the venues featured in this Music City Bandwidth series. You may not be able to be there in person, but you can still show your love for Music City's best. Thank you!

September 17: Kalie Shorr, AJ Kross, and Candi Carpenter in the round @ The Listening Room Cafe

Stay tuned for the October lineup and schedule!