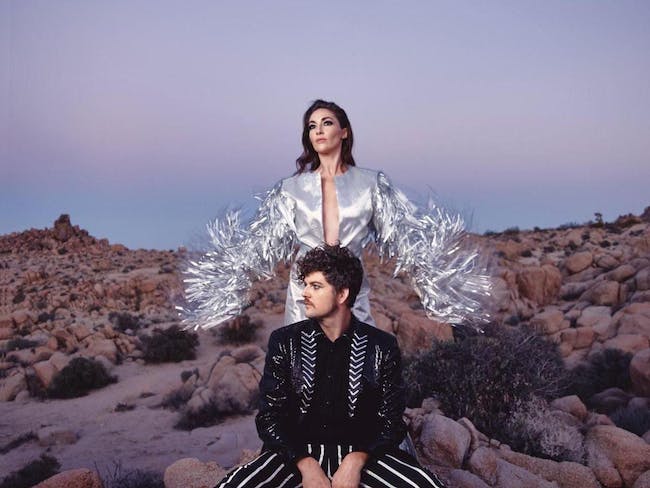 KOLARS is one of those rare acts which descends from another dimension, struts its sequin skin, blares it’s unabashed musical thrill ride and leaves audiences with their mouths on the floor.

Rob Kolar twists and turns as he sings imaginative lyrics with a raw swagger. He spins his guitar as notes sail and scramble through the room. A presence that embodies elements of Elvis and Marc Bolan with a ragged punky edge. The magnetic, one of a kind, Lauren Brown uses her whole body as a percussion instrument, tap dancing rhythms with her feet while simultaneously playing a full stand up kit with her arms. An alluring hybrid of Mo Tucker and Gene Kelly with a dash of Iggy Pop wildness.

Yes, there have been iconic duos before but none like this.

On record KOLARS are slightly more subtle and nuanced. Rob produces and mixes the music and has created a genre melding soundscape influenced by his film scoring. The band has inspired evocative descriptions such as “space blues," “glam-a-billy” and “desert disco." The style combines elements of new wave, blues, pyschedelia, glam, folk, disco and punk. The production experiments are infused into the live show. In essence, the duo are a hybrid of modern technology and raw rock and roll.

KOLARS have toured extensively across the US, Canada and Europe, playing many festivals and concerts in front of thousands. They have headlined national tours and have shared bills with Spoon, LP, Julian Casablancas & The Voidz, STRFKR, The Kills, Best Coast, Shonen Knife, RZA, Pussyriot, Built To Spill, The Horrors, The Growlers, Alanis

They have built their momentum through hard work and tenacity, growing their following one fan at a time. They tour relentlessly and do much of the work themselves. The husband and wife duo treat the business like a growing mom and pop startup. Rock and Roll with an entrepreneurial spirit.