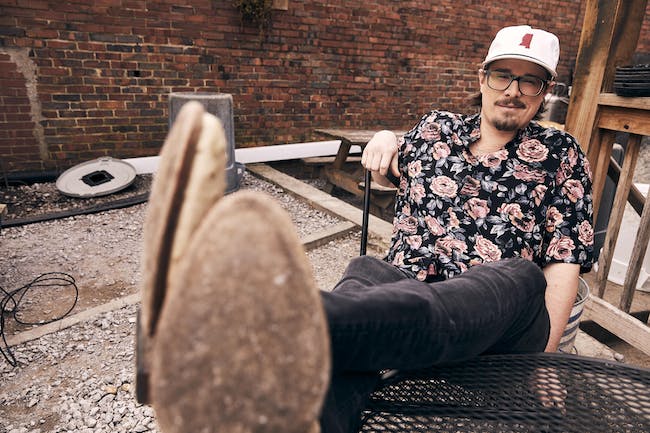 The sound is big. The towns are small. And the name is HARDY.

Big Loud artist HARDY grew up on classic rock in Philadelphia, Miss., a town of about 7,500 in the country setting of Neshoba County. So when fans hear the music on his first two four-song EPs for the label, This Ole Boy and Where To Find Me, they’re getting the real deal. The songs are bold and proud, the voice is commanding and the lyrics are centered on farms, in the backwoods and mostly in America’s heartland.

“I love that lifestyle, and that’s what I want to talk about,” he says unapologetically. “I’m not really a love song dude. If I’m going down that road, it’s a song like ‘This Ole Boy’ where it’s a redneck-in-love kind of thing. People that are like me, or people who still live in small towns, still love that and want to hear that. That’s why I’m who I am as an artist.”

HARDY’s artistic identity is notably focused on This Ole Boy and Where To Find Me. His voice is gritty in “4x4,” soulful in the background vocals of “This Ole Boy,” resigned in “Signed, Sober You” and edgy in the stack of HARDY harmonies in first single “Rednecker.” The production’s mix of swamp rock and country walks a line between strutting sarcasm, communal congeniality and personal vulnerability. And the incessant word play – where else does “quatro” rhyme with “macho?” – marks HARDY as a smart guy with an uncommon sense of humor.

Some of those traits are a direct result of his songwriting prowess. HARDY moved to Nashville to pursue the elusive art of matching words with chords and melodies, and 2018 became a breakthrough year for him. He was one of three writers on the Morgan Wallen/Florida Georgia Line collaboration “Up Down,” a #1 platinum- selling single built on HARDY’s original idea: “We live it up down here.”

He snagged two more hits as a co-writer of FGL’s “Simple” and “Talk You Out of It.” And he took part in Seth Ennis’ “Call Your Mama,” a lump-in-your-throat ballad that started its chart journey in fall 2018.

In fact, HARDY was so focused on writing that he didn’t really pursue his budding recording career. It actually came looking for him. FGL’s Tyler Hubbard and the duo’s producer, Joey Moi, were both convinced there was a place for his talent in the marketplace and offered to help him make it happen.

Perhaps unintentionally – perhaps on purpose – FGL helped him say yes by putting HARDY on stage three different times during its 2018 summer tour. He hit the road several weekends to write with the duo, and they brought him out to take Wallen’s “Up Down” part at the Country Stampede in Manhattan, Kansas; the Country LakeShake in Chicago; and the Iowa State Fair in Des Moines. HARDY was amped and animated in the role, as if he’d been playing in front of thousands for years. And the crowd reaction sealed the deal.

“Playing those places and those people singing back to you, that whole thing put it in perspective,” he says. “That is an incredible feeling. It’s just unexplainable.”

Fortunately, HARDY comes to the table as an artist with a strong view of who he is, thanks to his experiences in Mississippi. Philadelphia spawned two previous country music successes – Grand Ole Opry member Marty Stuart and songwriter/producer Derek George (Bryan White, Randy Houser) – and they certainly showed it was

possible to make it in the business. But HARDY’s original exposure to music came from his dad, who consistently had classic rock blasting when he took his son on the 15-mile commute from the house to the family’s chicken farm and back. HARDY pitched in on a job that was brutal to the senses – “I don’t even think I could go in a chicken house now,” he says – but he learned the value of hard work. And the exposure to smart hooks and distinct musical identities of the music his father listened to made a permanent imprint.

“I like Pink Floyd a lot,” HARDY says. “They’re my favorite band. Thanks to my dad, I loved The Wall and Dark Side of the Moon growing up, and once I got older, I realized how metaphorical and parallel their writing is, and how you understand it. I really appreciate, in all genres, creativity that sonically nobody has ever heard before.” His dad took him to his first two concerts – Aerosmith, in Birmingham, Alabama, in 1999; and KISS, in Jackson, Mississippi, in 2000 – but when HARDY wrote his first song at age 18, it set him on the path toward making music a vocation. That initial composition, “Caroline,” had the singer meeting agirl in a grocery store and obsessing about her, even though he would never encounter her again.

“It was just so simple and not thought out,” he says with a laugh. “There were little holes in the storyline. It’s interesting to think about it looking back now.”

But it got a reaction. His parents, of course, liked it. And when he played it for a few classmates at junior college, they liked it, too. HARDY started playing it at parties and creating a little buzz, though it was the only song he knew. That spurred him to write a few more.

When he heard Eric Church’s “Homeboy,” HARDY realized that rock had found a new home in country music, and it created a deeper appreciation for the genre, which had always been there in the background in Philadelphia.

Meanwhile, HARDY’s sister – Nashville makeup artist Madison Hardy Dennis – was going to school at Music City’s Belmont University, and when he visited her in February 2010, the experience was life-changing.

“Music was everywhere – I had no idea,” he remembers. “That’s when I found out about publishing deals and that you could make a living writing songs. That was over one weekend, so when I went back home I told my mom, ‘Hey, I’m moving to Nashville.’”

HARDY enrolled in the Recording Industry Management program at Middle Tennessee State University and majored in songwriting, mentored by instructor Rick Carnes, who composed Garth Brooks’ “Longneck Bottle,” The Whites’ “Hangin’ Around” and Reba McEntire’s “Can’t Even Get The Blues.” HARDY periodically posted performances of his own songs on social media, and another relative– Dennis Matkosky, first cousin to HARDY’s grandfather – reached out. Matkosky was an established songwriter, known for Michael Sembello’s “Maniac,” Keith Urban’s “You’ll Think Of Me” and LeAnn Rimes’ “I Need You.” Matkosky liked HARDY’s work, and within a few months, he signed HARDY to his own independent publishing company.

HARDY met FGL’s Tyler Hubbard at a parking lot party on Music Row in 2012, right as “Cruise” was being released, and didn’t see him again for several years. In the meantime, HARDY landed cuts by Tyler Farr and Walker McGuire, and when he got a

chance to start writing with FGL at their concert sites on the road, his acquaintance with Hubbard turned into a full-fledged friendship. Beginning in January 2017, he was a frequent sidekick on tour, writing with them on their bus during the day before

their concerts. In fact, “Throwback” – the newest song on This Ole Boy – was written on the bus at the Iowa State Fair in August 2018, just weeks before the EP’s release.

That project and the follow-up release, Where To Find Me, provide a strong base point for HARDY as an artist, representative of the hard-edged music, the easy-going people and the slow-changing nature of the world at the heart of a rural community.

“A lot of where I pull from is just being from a small town,” he says. “People live a little slower and a little more behind, whether that’s a good thing or bad thing.”

With his first two EPs, HARDY provides a solid opening salvo to establish himself as an artist, honed in on the sounds and stories at the core of his Southern heritage. It’s obvious in the middle-of-nowhere anthem “Where To Find Me” and in the twisted meaning and complicated rhymes of “All She Left Was Me.” But it’s just a starting point, a place to launch an artist whose combination of country imagery, Southern rock sounds and blue-collar vocals is intrinsically relatable.

“This stuff is my favorite and the most true to me,” he says, “but we will mix it up along the way, slowly but surely. I don’t want to scare anybody off, but we’ll give a taste here and there and hopefully by the end it will be a well-rounded sound.”

A big sound. About small towns. A HARDY representation.