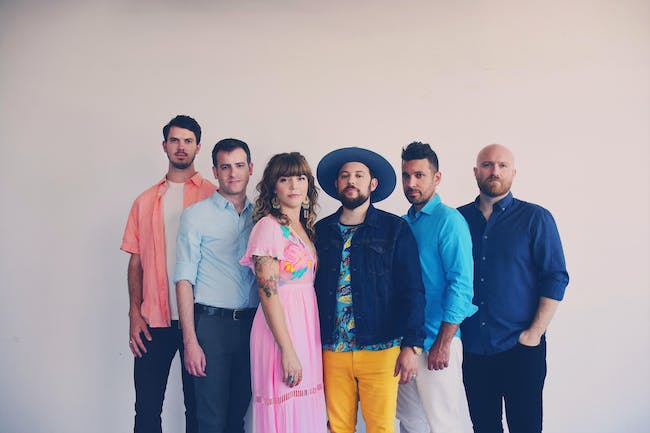 The Dustbowl Revival is an Americana and Soul band with eight full-time members who mash the sounds of New Orleans funk, bluegrass, soul, pre-war blues, and roots music, into a genre-hopping, time-bending dance party that coaxes new fire out of familiar coal. They band was founded in 2008 in the bohemian enclave of Venice Beach, California.

Dustbowl just recorded their fourth studio album with Grammy Award winning producer (Old Crow Medicine Show, Dropkick Murphy's) and Flogging Molly founding member Ted Hutt, to come out on Signature Sounds this summer. While the band launched with an old-time style and deeper bluegrass roots (a fateful Craigslist ad got it all started), they recently departed toward a more modern soul sound, still with their mixture of New Orleans swing, Americana, a little blues, and roots-rock. The soul-dipped first single of their new collaboration, came out on a 45 with a music video in the end of 2016, with a premiere via Relix Magazine.

Over the last five years Dustbowl has become known for their free-flowing and joyous live shows, combining their funk rhythm and brass section with a fast-picking string band section - opening for bands as diverse as Lake Street Dive, Trombone Shorty and The Preservation Hall Jazz Band, touring China as a guest of the state department and headlining festivals like Delfest, Floydfest, Hardly Strictly Bluegrass, and recently Bergenfest (Norway) and Tonder Festival (Denmark). The band received a big wave of attention with their music video that featured famous actor Dick Van Dyke for "Never Had to Go", which garnered over 10 million cumulative views.

A new album drops this summer and Dustbowl is ready to bring their newest sound - the place where funk and folk meet - to a bigger audience.