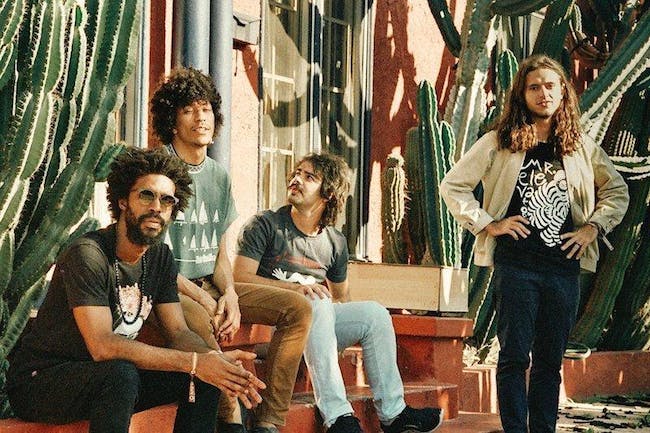 Boogarins’ Fernando “Dino” Almeida and Benke Ferraz began playing music together as teenagers in the central Brazilian city of Goiânia – creating psychedelic pop in their parents’ gardens, filtering their country’s rich musical history through a very modern lens. By the time the group’s home-recorded debut LP, ‘As Plantas Que Curam’ (2013), was released worldwide, the band had recruited a proper rhythm section and were developing a name around Goiânia. Soon after, the group was booking regular gigs in São Paulo and across the country.

Sombrou Dúvida, the band’s fourth full-length release, is a question. A play on words in Boogarins’ native Brazilian Portuguese. It’s a contraction of “Sombra ou Dúvida”, the title track of the album, which translates as ‘Shadow or Doubt’. There might seem to be a darkness to the question, given that both choices aren’t exactly cheery. Yet, Dino, the smiling, Afro-donned singer of the group tells us that “shadow” refers to a feeling related to your comfort zone, whereas doubt is the uncertainty that hits people and leads them to follow their instincts.”

Boogarins’ own instincts led them to continue elaborating on the dark themes of 2017’s surprise-drop Lá Vem a Morte (Here Comes Death) in a rented house in Texas. The quartet completed several additional tracks before relocating their efforts to a nearby recording studio for multiple sessions with engineer Tim Gerron and producer Gordon Zacharias over the ensuing 2 years, alongside several North American and European tours.

For fans of previous works by the band, Fernando Almeida’s songwriting and soaring vocals guide Sombrou Dúvida in a way that’s reminiscent of the Latin Grammy-nominated second album “Manual”, which was a portrait of a live band exploring the professional recording studio for the first time. The new 10-song set builds on this premise while retaining many of the home-recorded electronic elements of Lá Vem a Morte.

The use of a large, tuned live room at Austin’s Space Recording Studio allowed Boogarins to include the bold sound of their live performances — heavy rock guitar from Benke Ferraz (also in the producer role) colliding with experimental synth noise and bass undercurrents from Raphael Vaz, all driven by the incredibly dynamic and effulgent drummer Ynaiã Benthroldo.

“We didn’t want to write songs telling people what to do, but instead help them find their own thing. So, there are more questions in the album than answers” Dino adds. In these days of uncertainty, perhaps there’s some comfort to be found by remaining in the shadows.

Mdou Moctar immediately stands out as one of the most innovative artists in contemporary Saharan music. His unconventional interpretations of Tuareg guitar have pushed him to the forefront of a crowded scene. Back home, he’s celebrated for his original compositions and verbose poetry, an original creator in a genre defined by cover bands. In the exterior, where Saharan rock has become one of the continents biggest musical exports, he’s earned a name for himself with his guitar moves. Mdou shreds with a relentless and frenetic energy that utterly sets him apart.

Mdou Moctar hails from a small village in central Niger in a remote region steeped in religious tradition. Growing up in an area where secular music was all but prohibited, he taught himself to play on a homemade guitar cobbled together out of wood. It was years before he found a “real” guitar and taught himself to play in secret. His immediately became a star amongst the village youth.

In 2008, Mdou traveled to Nigeria to record his debut album of spacey autotune, drum machine, and synthesizer. The album became a viral hit on the mp3 networks of West Africa, and was later released on the compilation Music from Saharan Cellphones. In 2013, he released Afelan, compiled from field recordings of his performances recorded in his village. Then he shifted gears, producing and starring in the first Tuareg language film, a remake of Prince’s Purple Rain (Rain the Color Blue with a Little Red in It). Finally, in 2017, he created a solo folk album, Sousoume Tamachek, a mellow blissed out recording evoking the calm desert soundscape. Without a band present, he played every instrument on the record. “I am a very curious person and I want to push Tuareg music far,” he says.

2019 brings his first recorded in a proper studio - Ilana (The Creator), out Mar. 29th on Sahel Sounds. He has shared the first single, “Kamane Tarhanin,” and has announced spring tour dates in support of the new record. A long time coming, Ilana is Mdou’s first true studio album with a live band. Recorded in Detroit at the tail end of a US tour by engineer Chris Koltay (the two met after bonding over ZZ Top’s Tres Hombres), the band lived in the studio for a week, playing into the early hours. Mdou was accompanied by an all-star band: Ahmoudou Madassane’s (Les Filles de Illighadad) lighting fast rhythm guitar, Aboubacar Mazawadje’s machine gun drums, and Michael Coltun’s structured low-end bass. The album was driven by lots of spontaneity – Mdou’s preferred method of creation – jumping into action whenever inspiration struck. The resulting tracks were brought back to Niger to add final production: additional guitar solos, overdubs of traditional percussion, and a general ambiance of Agadez wedding vibes.

The result is Mdou’s most ambitious record to date. Ilana takes the tradition laid out by the founders into hyperdrive, pushing Tuareg guitar into an ever louder and blistering direction. For Mdou, his style is to draw on both modern and traditional sources and combine elements into new forms. In “Ilana” Mdou reaches back into Tuareg folklore for inspiration, riffing on the hypnotic loops of takamba griots, or borrowing vocal patterns from polyphonic nomad songs, and combining them with his signature guitar. You can hear the effect in tracks like “Kamane Tarhanin,” where a call and response lyric lifts up over a traditional vocal hum before breaking into a wailing solo with tapping techniques learned from watching Youtube videos of Eddie Van Halen.

As Mdou travels the world, he divides his time between two places, alternating from lavish weddings in Agadez to sold out concerts in Berlin nightclubs. It offers a unique perspective, but also means that he needs to address different audiences. At home, his compositions send a message to his people. Abroad, his music is an opportunity to be heard and represent his people on a world stage.