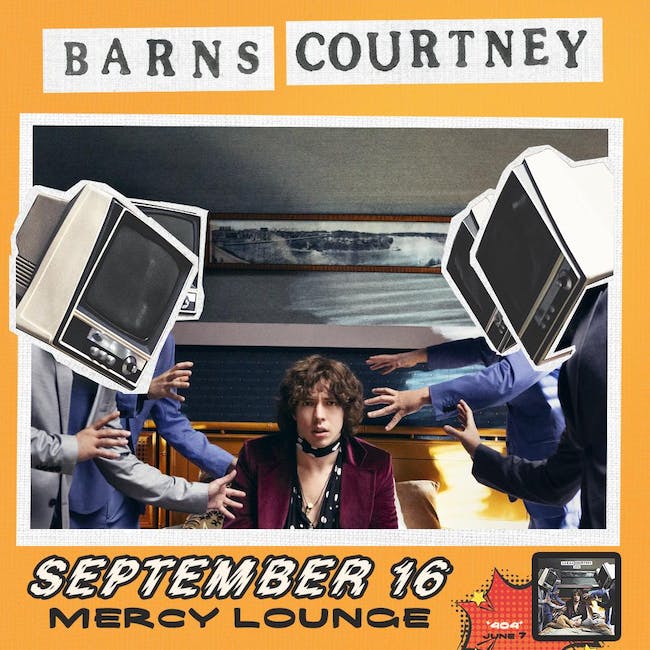 “I always knew I wanted to perform somehow,” says Barns Courtney. “There are photos of me at three years old, with my teddy bears all lined up, singing into a plastic microphone. Music is just an inherent part of me, and it was something I couldn’t help but pursue.”

Suddenly, that pursuit has exploded into one of the most exciting music stories of recent times. The young artist went from working part-time jobs and sleeping in his car to scoring hits on both sides of the Atlantic.

“Fire,” Barns Courtney’s first U.S. single, took off at SiriusXM’s Spectrum channel and ultimately charted in the Top 5 at Triple A radio and within the Top 15 at the Alternative format. Bradley Cooper and Harvey Weinstein personally tapped it for use in the film Burnt. “Fire” was subsequently heard in advertising campaigns for the Showtime network, the Volkswagen Golf Alltrack and BOSE Soundsport Wireless Headphones.

Meanwhile, “Glitter & Gold” went to No. 1 on the Spotify UK Viral Chart. Soon Barns Courtney found himself opening for The Who at London’s Wembley Stadium and also supporting such artists as Ed Sheeran, Elle King and Blur.

Growing up in Seattle, Barns Courtney’s passion for music was apparent early on. “I’ve always written songs, for as long as I can remember,” he says. “I wrote songs before I could play an instrument, just little poems or whatever, as young as six or seven years old.

“I liked to make the other kids laugh, making up silly songs or doing comedy, but my school was so serious that it didn’t even have a drama department, so I couldn’t see any outlet for who I was.”

The first album that really captured his imagination was Nirvana’s Nevermind, which he listened to every day for a year while walking to school. Courtney wasn’t aware, though, that the band shared his hometown, or the importance of Seattle as a musical hub. When he was 14, an aunt gave him a guitar, which proved to be a pivotal event.

He began performing, bouncing between various bands, and also expanded his musical palette. “My music is based in Americana,” he says, “but I was definitely into the Libertines, the Fratellis, Arctic Monkeys, all those British indie bands.”

Barns Courtney dedicated himself to his songwriting. “I knew that what I was writing was terrible,” he says, “but I thought that if I kept working, by the time I was 20, I might be alright.” He signed a recording contract straight out of high school, but when that deal fell apart, he went through several years of struggle.

“I had no qualifications, and I was the guy who had kind of forgotten to grow up,” says Barns Courtney. “For three or four years, I was working in clubs and at a computer store. It got really scary. But I never thought about giving up—it’s important to put all your chips on one number or how do you rise above the competition? When I was being honest with myself, I realized the importance of pursuing the thing that you love.”

His frustration fueled the songs he was writing. “They were all about aspects of the same feeling, a desperation to get back in touch with the burning passion I had when I started out,” he says. “That huge, defiant feeling—‘I’ll show them, I’ll get there somehow,’ a sense that burns in your gut.”

Over time, Barns Courtney cobbled together a demo tape and sent it around as best he could. It turned out that a friend of his was also a friend of a booking agent, who fell in love with the songs. And miraculously, once they started circulating within the music industry, the floodgates opened. The producers of Burnt put in their offer for the anthemic, propulsive “Fire” at the same time that the BBC started to play “Glitter & Gold.” More television offers followed. “After so long with nothing happening,” he says, still expressing his disbelief, “everything erupted at once.”

Released in February 2017, his debut EP, The Dull Drums, contained “Fire”—which has more than 12 million streams globally, with half of those in the U.S.—and “Glitter & Gold”—which has more than 8.5 million streams worldwide—plus three brand new songs. Paste Magazine hailed him as “The Best of What’s Next” and noted, “There’s confidence. And then there’s the swaggering self-assurance displayed by raspy-throated…blues rocker Barns Courtney on his recent single ‘Fire,’ a swampy, Gospel-steeped stomper.” Baeble Music highlighted the track “ “Hands” as one of its “Songs We Loved This Week” and observed, “Courtney has that something that you just don’t get to hear enough of anymore.”

Now Barns Courtney is at work on his full-length debut. “I want to make an Americana, blues-inspired record,” he says of the sessions he is co-producing, “but I also love Kanye West and the way he’s taking old blues influences and bringing them into modern age.”

Meantime, he’s also trying to learn from the reaction he’s getting from live audiences, as he introduces to them to material they’ve never heard. “The feedback has been so good, it really gives me a new perspective on the tunes,” he says. “I’m realizing that it may be important not to compartmentalize or define my songwriting—that my voice can really be the unifying component for this set of songs.”

For Barns Courtney, an overnight sensation who was years in the making, the greatest pay-off for his work comes when he takes the stage each night. “It’s nice to have people like my music, but that’s fleeting,” he says. “The real reward is that exchange of energy when the singer and the crowd are both on the same level—when there’s an equal playing ground and we’re all in it together.”