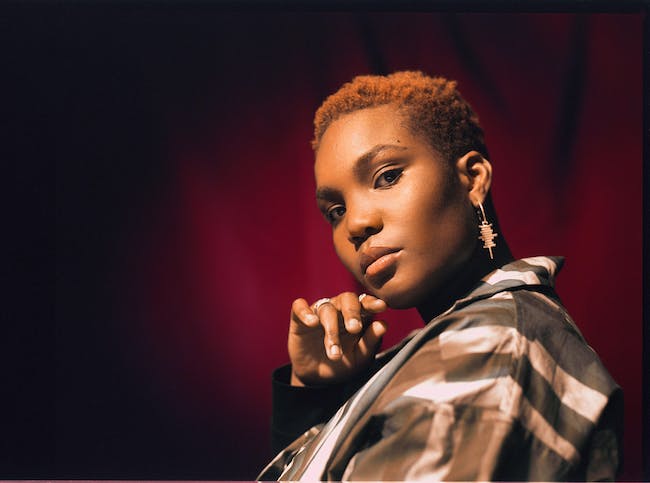 In Arlo Parks’s world, words are as useful as photographs. Luscious, expressive vignettes pepper the poetic lyrics in her sweet, ruminative indie pop songs. Born Anaïs Oluwatoyin Estelle Marinho, the 20-year-old from West London - who burst onto the scene with 2018’s “Cola” - uses poetry as her songwriting compass, weaving vivid imagery and sensory touches throughout the stirring, honest stories that make up her already-rich body of work. “I was really interested in the idea of delving into a hyper-specific moment and making it feel universal, making it something that people could connect to,” Arlo says about drawing from poetry in her approach.

A sensitive child, Arlo grew up in a peaceful part of town. “There wasn’t that much to do, and I was a pretty happy kid, I was very much in my own little world,” she explains, describing spending her free time exploring creative ways to express her emotions. “Because I was feeling a lot, I started writing quite young,” she says, referencing poets Gary Snyder, Mary Oliver and Pat Parker and more who inspired her to write. “It’s that cinematic quality that can make you feel like you’re plunged into someone’s subjectivity,” she adds about poetry’s impact. Arlo recalls a gift from her uncle—a record collection that included classics from Sade, Earth Wind & Fire, and Bob Dylan—and choir practice as fundamentals to her musical side. Like most kids her age, she grew up digging around on YouTube for music, discovering Portishead, Odd Future, Elliott Smith, Joni Mitchell, King Krule and an eclectic range of music to root herself in.

When she was 14, Arlo downloaded Garageband and started making beats to rhyme her poetry to, which over time naturally morphed into singing and the dulce soprano that sets her apart in today’s music climate. In 2017, she took a chance and submitted her recordings to BBC Introducing, which led to her first interview, management and recording contract. In the summer of 2018, Arlo dove into her first EP, collaborating with producer Gianluca Buccellati on 2019’s acclaimed Super Sad Generation. “We were in an Airbnb in London, just writing, taking photos, and going for walks,” Arlo remembers - they ended up writing the songs in just 24 hours. Arlo’s Sophie EP quickly followed, alongside performances at Glastonbury and Latitude Festivals and supporting slots on tour with Jordan Rakei and Loyle Carner. A place on the BBC Sound Poll, and inclusion in Dazed’s 100 List, followed in 2020 - beginning a truly exceptional year for Arlo. Landing covers with NME and Evening Standard, winning the AIM One to Watch and BBC Introducing Artist Of The Year Awards, making her debut appearances on COLORS and Later.... with Jools Holland, all whilst gaining champions in Phoebe Bridgers, Billie Eilish, Florence Welch, Lily Allen, Michaela Coel and Michelle Obama.

Arlo’s creative process has continued to develop naturally, and she’s taken the same thoughtful approach for her forthcoming debut album, Collapsed in Sunbeams, featuring the breakthrough singles “Black Dog”, “Hurt” and “Green Eyes” - which also featured vocals from friend, Clairo. While in quarantine, Arlo wrote and recorded the album’s twelve songs - collaborating again with Gianuca, but also introducing Paul Epworth (Adele, Glass Animals) and David Wrench (Frank Ocean, Sampha) - whilst drawing from the likes of Ram Dass to DJ Rashad and DJ Shadow to The Beatles to experiment with sound. “I was reading through a lot of my old journals and thinking about experiences that shaped and affected me during my adolescent years,” Arlo says about songs that unpack vulnerability, suffering and love. “I wanted to create something that still had the kind of intimacy of what I’d released before, but I did want to expand my sonic palette,” she adds. With these cues, she learned to relax and improvise, especially with playing the guitar this year: “When you're improvising, you don't have the time to overthink.” She studied the works of photographers like Ren Hang and Nan Goldin, and watched films by David Lynch and Studio Ghibli to strengthen the richness of her words. “I want the experience of listening to my songs to feel like you’re looking down the lens of a camera,” she says about the importance of distilling moments in her music.

“A lot of the reason why I write is to process difficult situations and delve into trauma,” Arlo says. And while music is her current outlet, Arlo has big plans for where she expects writing to take her. She’s working on a poetry collection and planning to write a novel. “I’m excited to go into different kinds of mediums, whether that’s directing or curating or acting,” she adds. “I want to have breadth in what I do. I’m interested in art as a whole.” A young mind well beyond her years, Arlo’s otherworldly storytelling talent and keen emotional intelligence is sure to turn her artistic dreams to reality. 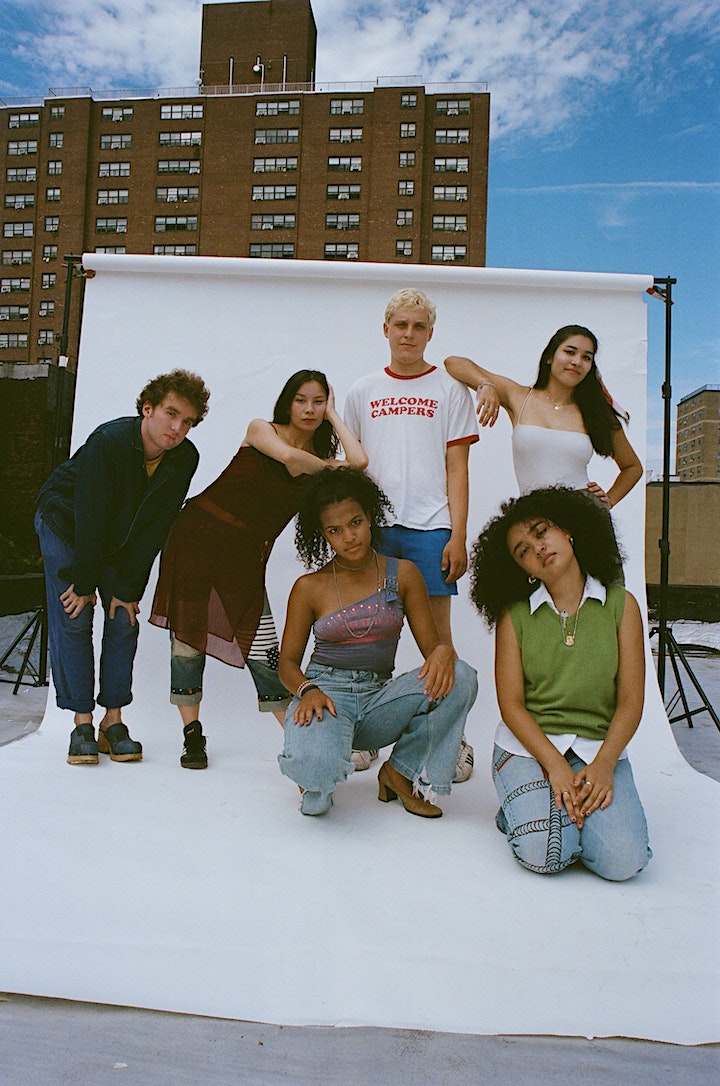 The kernel of inspiration for what would eventually become MICHELLE started in the spring of 2018 when Julian and Charlie were both in their second semester at separate colleges, both wading through bad breakups and looking for something to pull them out of the mire. “We wanted to be doing something instead of proactively destroying ourselves,” explains Julian. “So we started FaceTiming all the time.” Both trained multi-instrumentalists with self-taught production chops, the pair had been orbiting one another since their mid-teens at house parties and onstage at all-age event spaces like 7eventytwo. So they came up with this: write and record a one-off, quasi-concept record about growing up in New York… and do it in two weeks.

Pulling in vocalists they’d befriended in high school (Layla), college (Jamee), and through the local music scene (Sofia + Emma), alongside additional New York musicians and singers, the pace was swift, the method unconventional. Using Julian’s keyboard-strewn bedroom as a studio – monitors under his lofted bed and a makeshift vocal booth sandwiched between shelves and some hanging clothes – the vocalists would come in pairs and write alongside Julian and Charlie, laying down two tracks a day.

Fueled by passion and frozen pizza, the project was not without its nerves and tensions; after all, a creative collaboration in a small space with people you don’t know that well is a terrifying prospect for anyone. “A great record is like a tempestuous relationship – if there’s not some struggle to make it as great as it needs to be, you’re not going to hear any emotion in the music,” notes Charlie. “When me and Julian are battling it out in the control room that’s when I know it’s working.”

Released in September 2018, HEATWAVE is a streets-and-skylines homage to their hometown. The lyrics capture the city’s idiosyncrasies (“2.25,” “MANGO”), its magnetic pull and its polarizing qualities too (“STUCK ON U,” “THE BOTTOM”), all set to R&B-inflected pop, sleek synths, plush harmonies, and buoyant grooves. The collective’s omnivorous, disparate influences – Noname, Led Zeppelin, Sly and the Family Stone, Orion Sun, My Chemical Romance, SZA, to name a few – distilled to create a cohesive whole. But it wasn’t till a few months later that the group finally came together for the first time to rehearse – just once – on the day of their debut show (at Bard College where Layla and Emma were studying). “I feel like everyone was extra themselves that day,” recalls Layla. “So I really got a sense of who they were and how they moved through the world.” That evening the venue was packed and the audience knew the words to every song.

In some ways, it was only when the sextet started performing live that MICHELLE began to coalesce as a true creative collective rather than a standalone musical project. “There’s definitely a lot more comfort now,” says Layla. “This time around someone might come to Julian’s house and be like, ‘Yo, I’m so depressed today, this thing happened to me…’ and that would spark the writing.”

As their relationships strengthened so too did their songwriting abilities, turning inwards and to each other for lyrical grist. The push and pull of romantic relationships feature in songs like “Sunrise,” with its smart syncopation and indelible hook, or the smooth, 90s R&B swagger of “Unbound.” Elsewhere “FYO” sees Jamee and Emma taking the creative lead, exploring their biracial identity, setting their shared observations to a skippy beat and loungey, funked up sonics. It was the first time the two half-Korean songwriters had ever tackled such subject matter, but for a group predominated by queer, biracial women the space to discuss such topics is key.

“It’s very comfortable to be around such a diverse group of people – there’s real discussion and reflections about racial identity,” says Sofia, herself of Cuban-Italian descent. “It’s about being as honest as possible. Now we have this outlet to share our stories.”

“It wasn’t intentional at all,” adds Emma of the group’s composition. “But it’s going to matter for the people we play for, and in the work that we make, and the spaces we occupy.”

Listening to a recent podcast with Stevie Nicks and The 1975’s Matt Healy, Sofia was struck by a comment from Fleetwood Mac’s first lady: “What keeps a band together is when every member is still impressed by the other members in the group.”

It’s a notion that certainly rings true for MICHELLE. When the band recall their initial encounters, it’s clear they’re impressed, and in some cases in awe, of each other’s skills. The effect is almost of an unspoken individual challenge to push themselves forward creatively. Although MICHELLE is their top priority and focus, each member is involved in other endeavors, whether that’s solo projects or other bands (some with each other), finishing college degrees, or continuing to pursue commitments to dance and visual art. These days they respect and rely on each other’s input and advice and it all ultimately feeds back into MICHELLE.

“We’ve continued to learn about each other’s identities, pasts, and interests, and when we’re together I feel supported,” says Jamee.