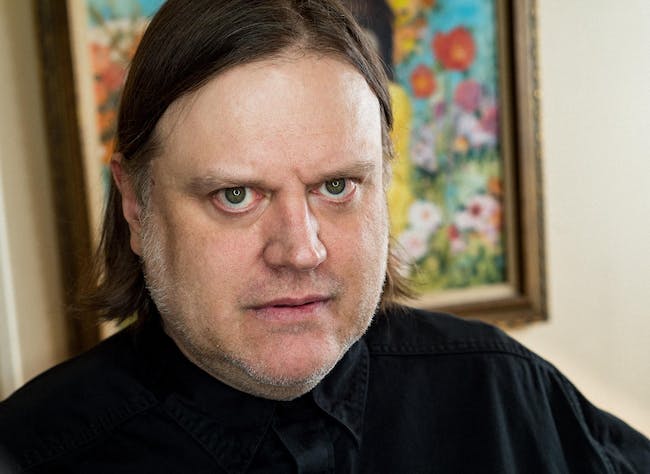 "When I was young, the artists that I really admired were the ones who always found a way to keep making music and expressing themselves," Matthew Sweet says on the occasion of the release of his 13th solo album Tomorrow's Daughter. "To me, those guys were the real artists, and I've tried to hold on to that attitude in my own work."

The seasoned singer/songwriter/producer/multi-instrumentalist is currently in the midst of a personal musical renaissance that's seen him produce some of the most compelling and ambitious music of his three-decade career. That description applies to Tomorrow's Daughter, on which such instantly memorable new tunes as "I Belong To You," "Run Away," "Lady Frankenstein" and "Out of My Misery" demonstrate his uncanny ability to tap into a bottomless well of pop history to craft music that's effortlessly catchy yet deeply personal.

Tomorrow's Daughter—the follow-up to the artist's acclaimed 2017 set Tomorrow Forever—is a persuasive testament to the enduring qualities of Sweet's adventurous, emotion-charged songcraft. The new album's 12 songs abound with the punchy melodic sensibility, playful sonic experimentalism and introspective lyrical insight that have been constants in his expansive catalogue.

Tomorrow's Daughter is the product of a burst of creative inspiration that followed Sweet's 2013 return to his native Nebraska, where he reestablished his Black Squirrel Submarine home studio. This period yielded 38 brilliant new songs, 17 of which appeared on Tomorrow Forever. It instantly became clear that this potent body of work merited a follow-up release, hence Tomorrow's Daughter.

"It just sort of became my next record," Sweet says of Tomorrow's Daughter, which like its predecessor is released via his own Honeycomb Hideout imprint but this time distributed by MRI / Sony. Both albums feature Sweet's current touring band, comprised of guitarist Jason Victor (also a member of the recently-reformed Dream Syndicate) and his longtime

rhythm section of bassist Paul Chastain and drummer Ric Menck (also known for their own acclaimed work with Velvet Crush).

"When I put together Tomorrow's Daughter out of what I'd recorded, the 12 songs totally made sense to me in sequence," Sweet explains. "I enlisted some of the people around me, friends and family, to listen to everything I'd recorded and pick their favorites, and everyone pretty much agreed on what was the top stuff. I think it stands up as a separate record, and as a time capsule of the time that we made it."

The distinctive musical and lyrical qualities that illuminate Tomorrow's Daughter have been hallmarks of Matthew Sweet's work since he began making music as a high school student in his native Lincoln, Nebraska. While attending the University of Georgia in Athens, Georgia, he became active in that town's burgeoning underground music scene, as a member of the now-legendary indie combos Oh-OK and Buzz of Delight, and in collaborations with R.E.M.'s Michael Stipe and Chris Stamey of The dB's.

A demo recorded with producer Don Dixon led to solo deals with Columbia (which released Sweet's debut album Inside in 1986), A&M (1989's Earth) and finally Zoo, which issued his commercial and creative breakthrough Girlfriend in 1991. Girlfriend won raves from critics and established him with a wide international fan base that continues to support him today.

Sweet continued to reveal new layers of songwriting depth and sonic creativity on his subsequent efforts Altered Beast, the spin-off EP Son of Altered Beast, 100% Fun, Blue Sky on Mars and In Reverse. His musical gifts continued to shine into the new century with Kimi Ga Suki, Living Things, Sunshine Lies, Modern Art and the Under the Covers series, a three- volume collaboration with Susanna Hoffs of the Bangles (Sweet also served as producer of the Bangles' 2011 album Sweetheart of the Sun).

"I can barely even fathom it," Sweet says of his massive body of recorded work. "But here I am, so I try to live up to whatever it is I've established so far. To do the work is the really important thing to me, but knowing that I'm connecting with people makes me happy. I've continued touring pretty consistently, and it's nice to see that people still care enough to come out to the shows. There seems to be a real emotional attachment for them, which means a lot to me."

Sweet is in the midst of an especially productive period that's seen him continue to generate new material at a prolific pace. He's already recorded Wicked System of Things, a collection of new original songs to be released as a limited-edition vinyl LP in November 2018 for Black Friday Record Store Day, and is planning his next general-release album.

"I feel like I'm gonna be pretty active for awhile, and it's fun to be releasing a lot of music," he says. "I thought that there might be some resistance to putting out so much stuff, but that hasn't been the case, and that's encouraged me to keep going."

Now firmly ensconced, along with his wife, cats and vintage recording gear, in Nebraska after a two-decade-plus stretch in Los Angeles, Sweet works out of his home studio, which allows him to indulge his bottomless musical imagination, and to engage in long-distance collaborations with musicians in other locations—a method that he employed on both Tomorrow Forever and Tomorrow's Daughter.

"In some ways I think that moving has had a positive effect musically," he reflects. "I think it reconnected me a little bit to what it felt like when I was really young and music was new to me, and maybe that's reflected in the music. But it's hard to say, because making music is so internal for me that it's mostly in my head rather than my surroundings."

Meanwhile, Sweet's catalogue continues to be a source of inspiration for longtime fans and new converts. For instance, the Intervention label is planning deluxe two-LP vinyl editions of Girlfriend, Altered Beast, Son of Altered Beast and 100% Fun, which will feature a wealth of rare and unreleased material. But it's creating new music that remains Matthew Sweet's main concern, and he continues to do so with renewed intensity.

"This feels like a really good time for me, and I feel lucky and grateful to still be doing what I love to do," Sweet asserts. "I feel like I'm in a totally positive place, and maybe moving has been a catalyst for that.

"When I meet young people and they ask for advice about a career in music, I always say, 'Do music because it's what you love to do, and because you'd do it no matter what happens,'" he concludes. "I've tried to keep that attitude about it, because that's always worked for me. I just try to keep doing my thing and keep believing."