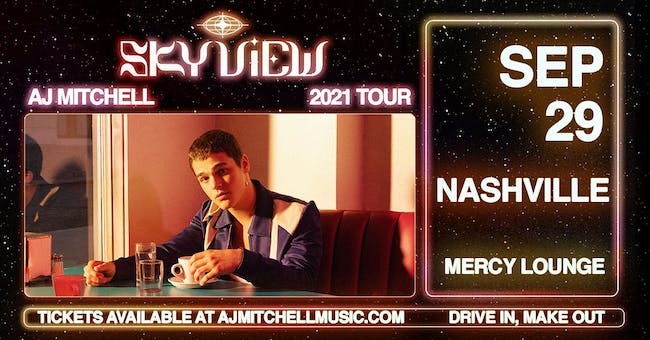 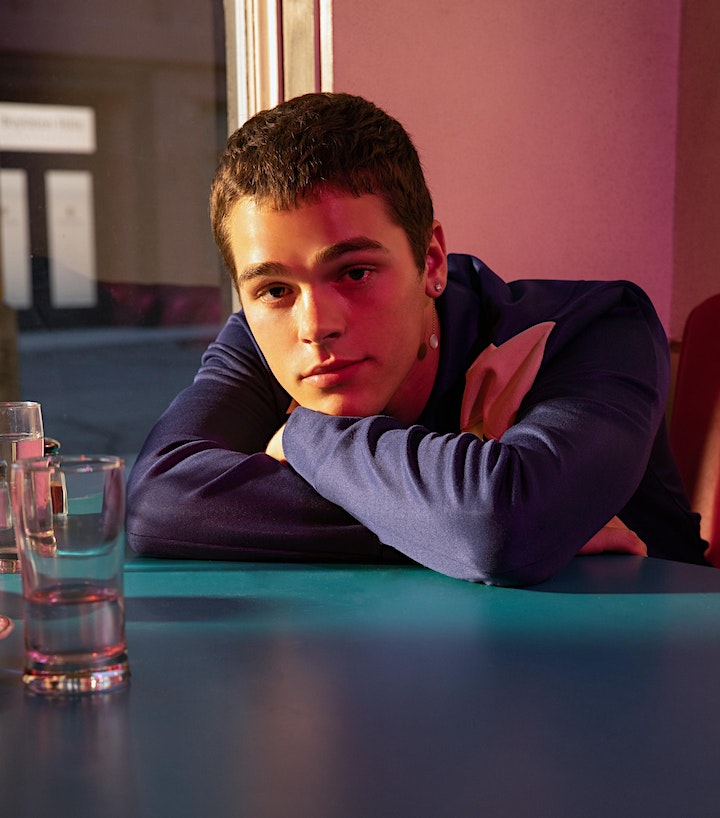 You’ll find Belleville, IL about six hours south of Chicago. It often resembles a ghost town with its many hollowed-out and abandoned factories, marathon winters, and endless cornfields. From the outside, it might not seem like the perfect launchpad for a future pop star, but AJ Mitchell proudly calls this place home. Long before notching 1 billion-plus streams, selling out shows, and performing on television, the singer and songwriter grew up in this small and unassuming Midwest town.

Now, he doesn’t forget where he came from on his full-length debut album, Skyview [Epic Records]— named for Belleville’s lone drive-in theater.

“Belleville feels like an old carnival in the middle of nowhere,” he explains. “Honestly, I’m glad I grew up there, because I learned a lot. It made me who I am. I saw friends get into drugs and gangs, and I realized this isn’t where I want to be for the rest of my life. I really wanted to escape. Music was my way to do that. Before school, during school, and after school, I could play piano and write about what I felt. It was my getaway. Skyview was one of the most influential places, because I would go there every weekend. It always inspired me to go to my room and write music. The album brings me back home. It’s important for people to know where I came from. That’s why I’ve got to put Belleville on the map.”

AJ has most certainly made Belleville proud...

Since emerging in 2018, he has consistently asserted himself as pop’s most dynamic new leading man. Averaging over 6 million monthly listeners on Spotify, he impressively leaped past the 1-billion stream mark within three years. In addition to being named a Vevo LIFT artist and MTV Push artist, Variety championed him on its “Young Hollywood” 2020 list. Beyond acclaim from Billboard, Idolator, Highsnobiety, and Seventeen, he delivered show-stopping performances at the MTV VMAs and on The Today Show and Good Day New York. In 2019, his Slow Dance EP yielded the gold-selling title track “Slow Dance” [feat. Ava Max]. Including the latter, he has logged four songs on the Top 40 at Pop Radio thus far. Between collaborating with everyone from Steve Aoki to Rich The Kid, he assembled Skyview over the course of 2020. Ingesting the classics, he listened to everyone from Bruno Mars, Stevie Wonder, Justin Timberlake, and Marvin Gaye to Whitney Houston and The Beatles. However, he also got a little help from a legend when Mike Dean [Kanye West, Travis Scott, 2Pac] hopped aboard as the album’s Executive Producer. After collaborating on AJ’s breakout “Used To Be,” they perfected their creative partnership on Skyview.

“Honestly, it’s kind of crazy to even say Mike executive produced my album,” he smiles in disbelief. “It’s a dream come true. It feels full circle, because he did ‘Used To Be’. He made everything sound coherent and feel like a journey, which is what I wanted. It’s a perfect balance from the synths to the bass. There’s one cohesive sound. He understands where I come from and the style of music I like. He just put the Mike Dean special sauce on it.”

He introduces this journey with “Cameras On.” Over an unpredictable bounce punctuated by keys and a hard-hitting hook, he opens up about an earlier phase of his come up.

“I used to live in this social media house called Team 10,” he recalls. “Once the cameras turned on, the dynamic changed. Everyone was all of a sudden like, ‘Oh, I love you’. When the cameras shut off, nobody talked to one another. Everybody was staring at a phone. I was young, so it was weird for me to understand. The only thing that saved me was music. Once again, it took me away—just like it did back in Belleville.”

Then, there’s “One More Fight.” On the track, glossy piano glistens through a steady beat as his voice resounds with confidence and charisma. He urges his love, “I’d rather fight with you then have to fight without you.” Most importantly, it speaks to an overarching theme of the album.

“This is truly what I want to say,” he goes on. “Nothing is fabricated. These are things I’ve been through.”

Providing a moment of intimate introspection, the standout “Growing Pains” marked a turning point in his development.

“Quarantine was a really hard time for everyone,” he states. “We all go through growing pains, but I felt like everything was changing in my life. It made me realize I need to be as authentic as possible.”

That’s exactly what he does on Skyview.

“When you listen to the album, I want you to feel nostalgic,” he leaves off. “It really takes me home. At the same time, I want you to know more about who I am. Talking to the camera is unnatural for me. The best way for everybody to understand me is through my songs. I’m still just a kid who lives his life through music. There’s not a single day I don’t think about it or don’t want to run to my guitar, my piano, or my notepad and start writing.”